Because it is 2020, our trip to the Oregon coast, to get away from the smoke blanketing Northern California, was a total bust.

Don't forget, we were supposed to be in Monterey this week - finalizing the plans for Kidling1's wedding there next May. Of course, the wedding got pushed back to November of next year because some older relatives came forward with concerns about COVID. We all already had the week off and it is Kidling1's birthday, so we made these last minute plans for the Oregon coast and shifted gears.

We left early Tuesday morning, picked up my mother, and headed north. The winds were intense and a usual straight shot up I5 resulted in both her and I becoming quite car sick. We also passed an industrial barn on fire. Omens much? Got to the kids place and a helicpopter was hovering about a mile away where a fire was threatening to jump a highway behind their place. Still, excitement was high and they piled in to their rig and we were on the road after the ubiquitous coffee refueling. Thankfully, the winds had died down but we drove through acres of a burn scar from last year's burn season.

Made it to the border and the winds had picked up to severe gusts. Coming into Ashland, we all lamented the loss of this year's Shakespearian festival and then the phones started dinging. I5 was closed! No prob, we began a circuitous detour through the ever-charming tiny streets of old Ashland. We passed a gas station and uh, there were cars lined up around a city block! That's when we got another alert, parts of Ashland were evacuating. We pulled over and got out into some sort of apocalyptic thousand degree wind gusts, and that suburban block was littered with broken tree branches and leaves as though a small tornado had just moved through. A wonderful resident standing on his front porch and giving out orders to groups of young people came over and advised that a big wildfire had started behind his house an hour before, he had evacuated to this house, and now was praying. He thought it would be a small event though, and gave us backroad directions over to the coast.

Two blocks later and we ran up against a slew of traffic controllers pointing us back southwards. As we turned and began to leave, the northbound lanes of this small town were cemented in with hundreds and hundreds of cars and tractor trailers. Ashlanders were on their front porches agape, they had never seen anything like that! We decided to regroup about two miles back down I5 and make a plan. Pulled over at the bottom of an offramp, creosote filling the air, we ate a quick lunch - none of us had breakfasted and it was one o'clock by then. We all had our phones out and the event began to grow before our eyes. We could see plumes of smoke, we could see the ODOT map turning red with XXXs. And then. The California border closed. I can admit I full-on panicked.

I don't like that trait in myself and when the smalls were actually small I could control it because one has to, hasn't one? But sitting in a heavily wooded holler surrounded by the densest forest seeing smoke rising knowing that I5 and Ashland had become parking lots and then seeing the border close with no explanation, my mind just went to another fire and being trapped. Obviously, the border closed because I5 was closed ten miles in....but my lizard brain could not be convinced. Kidling1's beau is very kind and calm and he talked me down.

We waited for about an hour and a half and it became horrifingly apparent that things were bigger than we could imagine. More reports of more fires. And we got back on the 5 and started for home. It was disheartening to say the least. A round trip of 450 miles in all. In one day.

We stopped for a few hours at the kids' place, made dinner, had an early birthday celebration for her, and were back in our own beds by 10 pm.

Only to wake the next morning with a pounding headache and a pitch black world. The Bear Fire had exploded the day we were on the road - the winds! And the ash turned the world dark until mid-morning. Here's an unflitered, untouched photo at 9 am from the back deck - 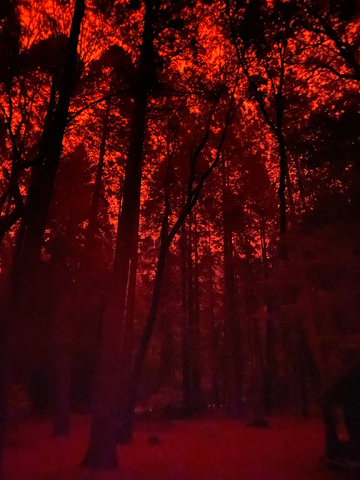 People are losing their lives, their homes, their livelihoods.
Collapse